RCE Consultants has been providing various transport system studies related to the requirements for coal-on-rail loadout from the new ResGen Ledjadja coal mining development in the Waterberg.

Studies have been conducted at different levels of detail over a period of more than five years. The application of cutting-edge train technologies contributed greatly to the study outcomes. What commenced with concept route determination has eventually developed into a full network transport logistics solution.

The key feature of the various studies is the advancement of engineering concepts, route determination and train designs from the original base case to the current offering. New technologies have impacted greatly on train design and system capacity.

What started off as a 6Mpta project, has developed into an integrated concept model with a potential annual tonnage greater than 100 million tons. The complexity and depth of these studies span the entire range of Engineering disciplines involved.

Challenges extend way beyond designing and planning for the Boikarabelo Mine’s output in isolation. The quest evolved into ground-breaking work in devising a heavy haul, 26t axle, 200 wagon train service operating with multi-traction Distributed Power technology, with network capacity greater than 100Mtpa, including the possibility of links into Botswana.

The outcome of the studies can rightfully lay claim to the first definitive rail transport solution opening up the Waterberg coalfields to domestic and export markets. 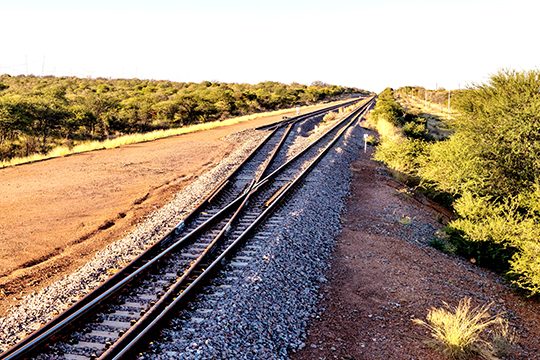